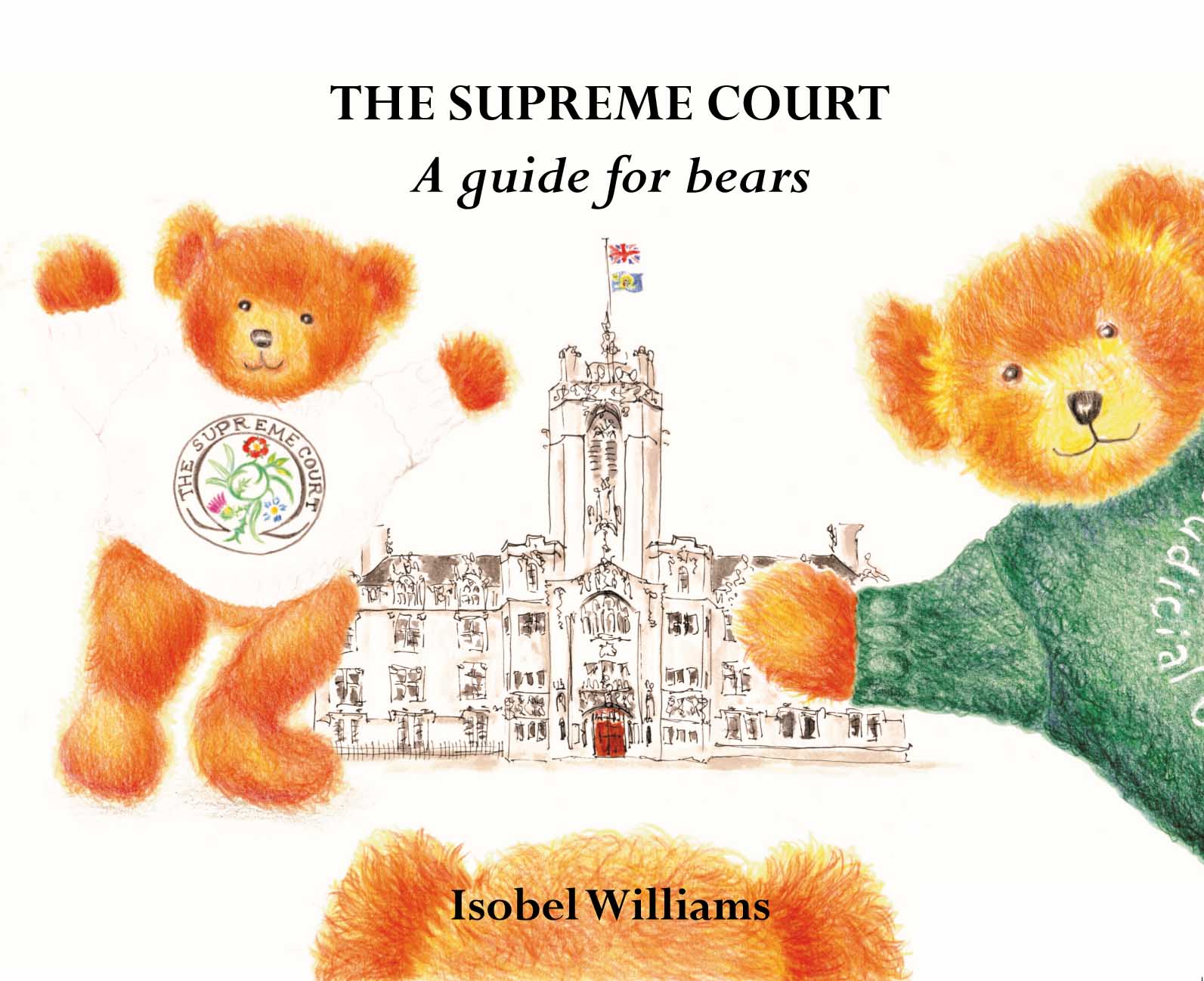 Get the lowdown on the highest court in the land

The Supreme Court: a guide for bears is available from the UK Supreme Court, bookshops and Amazon at £6.95, or email me your order (£2.43 UK p&p).

"Isobel Williams's drawings capture the essence of these inquisitive and endearing characters - and her words help bring to life some of the things they get up to when the Justices and staff aren't looking." - Lord Neuberger, former President of the Supreme Court

"A charming guide for children and adults alike." - Joshua Rozenberg

You can contact me here; this is my blog; reviews are here.

Catullus: my shibari-themed illustrated versions of 60 of his poems are coming out on 25 March 2021. Ten of them are also in the anthology New Poetries VIII. Both books are published by Carcanet Press. Please see for info about online launch events. Some of the versions appeared in Envoi, The Frogmore Papers, Stand and Poetry Salzburg Review.

Cover illustration: Chris Hanretty's book A Court of Specialists: Judicial Behavior on the Supreme Court (OUP) uses one of my drawings from Nicklinson - I review it here.

The UK Supreme Court Yearbook: I supplied the frontispiece drawings for Vol. 7 and Vol. 9.

Emily Allbon aka @lawbore of City Law School curates 'the less textual legal gallery' tl;dr, a colourful and entertaining resource for law students and the generally curious. I'm delighted to be a contributor at the launch stage.

Kensington Town Hall: some of my Notting Hill Carnival drawings were on display from July-September 2019.

International Journal for the Semiotics of Law: my paper on the drawing arc from street to Occupy to court to shibari is here (September 2019).

I did some illustrations for the 2019 'crime and punishment' issue of Proof, the print magazine of The Justice Gap. For the 2017 issue I wrote an article about drawing in court, and I illustrated the first issue in 2016.

'Inhuman horror': my UK Supreme Court blog is featured in an article in International Journal for the Semiotics of Law (March 2019)

Sussex University: I gave a talk about drawing in and out of court to the Art/Law Network in November 2018.

Some of my sketches from the Article 50 appeal in the UK Supreme Court are reproduced in the book 'The Presidents' Hammers' edited by Diego Tonus.

Some of my shibari drawings are reproduced in the book 'Not Only Ropes' produced by Andrea Ropes and Davide Conti.

Örebro University, Sweden: I gave a talk at 'Law and arts in crime settings', the 19th International Roundtable for the Semiotics of Law in May 2018, and wrote about it here.

The Amorist: I wrote and illustrated an article about shibari for the launch issue in May 2017 and reviewed Welsh National Opera's Der Rosenkavalier for the third issue. For the November 2017 issue I reviewed the National Gallery exhibition Drawn in Colour: Degas from the Burrell.

I drew the cover illustration for Debating Judicial Appointments in an Age of Diversity edited by Professor Graham Gee and Professor Erika Rackley, published by Routledge in September 2017.

JW3, London: I took part in this salon about art and law in May 2017, with Hubert Best, Frances Fyfield and Jacqueline Nicholls.

The Carnival Village Trust in Notting Hill held a multi-media art competition, 'Carnival Captured'. I won second prize and blog about it here.

This snapshot of my live-drawing life, based on my talk at the University of Porto conference O Estranho e o Estrangeiro: Arquitectura, Justiça e Teatro in July 2015, is in the conference anthology. I wrote about the conference here.

Senate House, London: in October 2016 I drew the goings-on at Salon Voltaire, this Dada-inspired event.

St Mary's University, Twickenham, Centre for Law and Culture: in September 2016 I gave an illustrated talk, The Naked Rambler, the naked barrister and the naked artist, at a conference, (In)visibility. I also spoke at 'Visualising Law and Gender' in September 2014.

My solo exhibition The Body of Law at the School of Advanced Study, Senate House, University of London ended on 30 July 2016. This exhibition was part of the Institute of Advanced Legal Studies' public engagement programme. It was reviewed by ICLR and by Talking Humanities and there are a few posts about the Senate House experience here.

Oslo, gallery VI, VII: my solo exhibition from May to July 2015 featured my drawings of The Violet Crab, Than Hussein Clark's cabaret-themed exhibition at the David Roberts Art Foundation; I blog about it here. It is reviewed in Flash Art here and featured by Contemporary Art Daily here.

Lincoln's Inn, June 2015: I gave a talk about drawing in the Supreme Court as part of the Judicial Images workshop organised by Birkbeck and the LSE.

I gave two talks at Aberystwyth University in April 2015. The first looked at depictions of women in court; the second was about drawing at the UK Supreme Court.

The exhibition of my Supreme Court drawings at Pinsent Masons' Broadgate office ended in April 2015 (list of works). Here are some thoughts from @infolawcentre.

On 15 May 2014 I gave an illustrated talk (twice) at the Supreme Court as part of a Museums at Night event.

In February 2014 I gave an illustrated talk for Cartoon County in Brighton about drawing in the UK Supreme Court via the Westway and Occupy. In 2013 I gave talks at Birkbeck (University of London) and at Laydeez Do Comics in London.

Picture-blogging in the Supreme Court: this article first appeared in Counsel magazine, February 2014.

I started drawing people in Portobello Road and wrote this article in ES Magazine in 2011, before moving on to draw the Occupy protest camps in London.